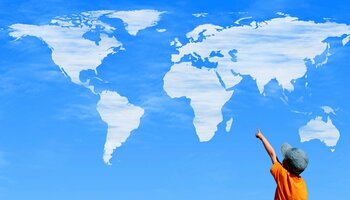 International marriages that often thrive with money, may wither as the global recession takes hold and deepens. Divorce lawyers in metro-poles such as New York City and London are noting an upswing in their international clientele.

International marriages and their attendant transnational families complicate the divorce process, especially when marital assets are in a country other than the marital domicile, and one or both spouses come from a pair of “old countries”. In many such families, one or both spouses are professionals. Their marital estate, even if modest, is spread out. Oakland, Macomb and Wayne Counties all have their share of international marriages due to a significant Arab population and the presence of multinational corporations in the automotive industry.

With layoffs in all sectors of the automotive industry, some of these marriages are predictably coming under stress. Others are failing. When this occurs, one of the first issues is where, which country, to file the divorce complaint. Some countries have legal systems that favor one gender over the other on a series of common issues such as property rights, custody and parenting time.

In a recent case from Waterford & Clarkston, the Michigan Court of Appeals reversed a family court judge that recognized a divorce obtained in India via the Muslim “triple tiraq”, where one party (in that case, the husband) simply states “I divorce thee” 3-times, even though the wife had no actual notice or input to the proceeding, and was not present for the Indian divorce.

In other examples, Michigan has followed California in requiring full and complete disclosure of all assets. Japan and Austria, on the other hand, require very little disclosure of a spouse’s property interests. While Japan favors quick “no-fault” style property divisions, convenient for the often-male members of the international elite, the Japanese courts are resistant to fathers seeking joint custody and equal parenting time. Japanese family law reflects the more traditional Japanese culture in this regard.

One of the more significant issues likely to arise in an era of decline in the nuptial-international, is parental abduction and removal of the minor children to third countries. Both the United States and the U.K. have reported increases of international parental abduction. According to The Economist magazine, the kidnappers are the children’s mothers in 68% of the cases. According to the Hague Abduction Convention (an arm of the World Court in the Netherlands), the U.S. currently has the largest number of incoming and outgoing abduction cases, followed by England. An overwhelming majority of these cases involve transnational families.

Parental kidnappers believe they are merely getting the drop on their spouse by “forum shopping” the available legal systems; often feeling entitled to assert preemptive custody along with their choice of law. Lawyers in Detroit, Chicago, New York, Miami and elsewhere, are specializing in advising clients on issues of choice of law and international comparative family law. Divorcing spouses are counseled on which legal systems provide the most benefit, given their particular circumstances.

Intercountry adoption is also a fast-developing area of international family law regulated by a Hague Convention and with guidelines currently under development. One of the cutting-edge problems here is the adoption of children without parents from less developed countries and the human rights concerns such adoptions raise.

Developments in reproductive technology and medicine have also given rise to international disputes involving child custody and property rights. For example, infertility clinics in India or China are not bound by U.S. regulations and can thus attract large numbers of clients from the U.S. and Europe desperate to have children. If disputes arise among the genetic contributors (biological parents, surrogates, etc…) and the “rearing parents”, international treaties are ill-equipped to resolve the dispute, or non-existent.

Depending on the country of origin and the respective nationality of the spouses and children, there are a wide variety of options in international family law. One of the first issues is the selection of the forum state pursuant to the legal principles of “choice of law”. At every stage, the interests of the minor children must be considered. Parents and interested third parties should take care to keep the interests of the children at the forefront of their deliberations and refrain from resorting to drastic measures such as a preemptive custody move based on “choice of law” concerns. The world is a very big place for a child. All children deserve both parents to help them find their way.