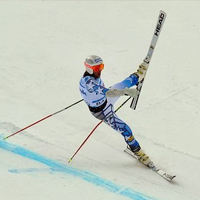 The photo at left notwithstanding, Bode Miller has picked-up several Olympic skiing medals in both Salt Lake City and Vancouver over the past decade; he is currently training for the 2014 Winter Olympics in Sochi, Japan. As a result, he is one of the few household names in men’s downhill skiing.

Now he also is becoming known for a bi-coastal custody case involving a woman he briefly dated, and impregnated, from the match-making site for wealthy super-stars: Kelleher International. This morning, he is scheduled to appear in the Manhattan Family Court for proceedings to establish temporary custody of his 9-month old son.

As happens so often, the mother of the child, Sara McKenna, became disillusioned with the father shortly after announcing her pregnancy, moving from San Diego to New York City to attend Colombia University on the GI Bill [she is a U.S. Marine]. Miller hired lawyers and sued in the Manhattan Family Court to have McKenna return with the couple’s then-fetus, to San Diego where he maintains a residence.

In a surprising ruling last June, a Manhattan Family Court Referee issued a decision impugning the mother’s conduct, accusing her of appropriation of the fetus [an inchoate form of parental kidnapping], and of forum shopping. The Referee’s preliminary ruling determined that McKenna’s conduct was sufficiently “reprehensible” to justify a departure from New York law and ordered the infant returned to San Diego even though the child’s “home state” is New York by virtue of the fact that he was born in NYC.

Bode Miller turned-up in the Big Apple last September, with his new wife in tow, to snatch the baby from the arms of a highly distraught McKenna. This caught the attention of some of Manhattan’s high-powered family law attorneys and an appeal was lodged with the New York Supreme Court Appellate Division.

In reversing the Family Court Referee, the appellate court held that a custody case cannot be filed prior to birth, as was done by father’s attorneys. The appellate ruling held that McKenna’s relocation to NYC during her pregnancy was not relevant to the determination of the infant’s “home state” under the applicable New York law.

The appellate ruling has implications that protect the constitutional rights of pregnant women to move about the country, despite being pregnant. Putative fathers cannot restrict the constitutional liberties of the women whom they impregnate according to this important decision.

This custody case was remanded back to the Manhattan Family Court and is scheduled for a hearing this morning on the issue of temporary custody.

Sometimes, parents feel they are victims to the subjective rulings of family court professionals: the judge, the referee, or the family counselor of the Friend of the Court. Whenever you face custody proceedings in a family court, it is best to secure representation from a lawyer that has experience in dealing with the professionals in that court.