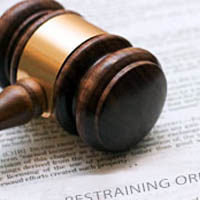 Parents behaving badly in family court; happens all the time. When your family life is placed in the public arena of family court, pressures can mount; not everyone handles the pressure with poise or grace.

But some folks are just plain mean. When they make threats to a co-parent, injunctions can issue from the court and can lead to restrictions on the aggressive partner’s parenting time.

A case from Waterford & Clarkston Family Court was recently upheld on appeal illustrating the principle. In Song v Moore, the petitioner’s significant other attacked her on two separate occasions: one attack left bruises on her face and arm; in the second attack, her threw Ms. Song into some furniture and against a wall.

The attacks occurred within the context of raising the couple’s teenage son. During one of his attacks, Moore bumped his son into a wall.

The injunction issued by the family court, which included reducing father’s parenting time to supervised sessions, was upheld on appeal. The rationale used by the Court arose from the language of the PPO statute which provides that as a condition of the PPO, the family court can restrain or enjoin the respondent, “from removing minor children from the parent having legal custody of the children, except as otherwise authorized by a custody or parenting time order issued by a court of competent jurisdiction.”

In addition to the child-specific statutory language cited above, the Court of Appeals again affirmed the general powers of a family court to restrain, “any other act or conduct that imposes upon or interferes with personal liberty or that causes a reasonable apprehension of violence.” Time and again, the Court of Appeals has held that this language includes the power to enjoin parental contact within its scope. Family law professionals will recognize that an abusive parent often deploys minor children as pawns in an intimidation campaign.

In the Song case, Father also challenged the lower court’s injunction from an evidentiary perspective, claiming that none of the incidents alleged by Mother were the subject of a police report. In affirming the family court injunction, the Court of Appeals again relied on the express language of the statute which directs that a court shall not decline to issue an injunction solely due to the absence of: a police report, medical report, or administrative finding or report.

Often, the only evidence that abuse occurred is the sworn testimony of the petitioner. Family court judges are routinely faced with the “she-said-he-said” scenario. The decision whether to issue an injunction is within the discretion of the judge assigned to the case. If a family already has a pending divorce or custody proceeding in the county family court, most counties operate from a one-judge-one-family administrative principle.

If you are in need of protection from an abusive spouse or significant other, consider locating a family law attorney that can get into court to champion your rights and secure your protection. Most lawyers will offer a free consultation during which you can explore your options.