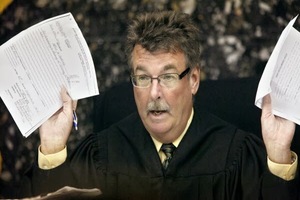 This one comes to us from Southern Florida, courtesy of our blogging friend, Jeanne Hannah. A family court judge in Palm Beach County took a divorcing couple to task in a tersely-worded opinion, ordering the couple to remain married and refusing to grant the requested divorce.

Why? You ask. After a two day trial in November during which both husband and wife testified as to significant unreported income, cooked business books, hidden assets, re-titling assets in other family members’ names and other mutual marital misdeeds, Judge Edward Garrison wanted to jail the couple but could not, being only a family court judge and not presiding over a criminal case.

Apparently, in denying the couple’s prayer for equitable relief, the good judge also sensed that he was being played. The court assessed the joint demeanor of the couple as being indicative of an intact relationship.

Perhaps the judge sensed that the requested divorce was simply another ruse by the couple to defraud their creditors and business associates. So Judge Garrison refused to divorce the couple, laying down a ruling believed to be the first of its kind in an American family court:

This case is truly a first in the annals of American Family Law.